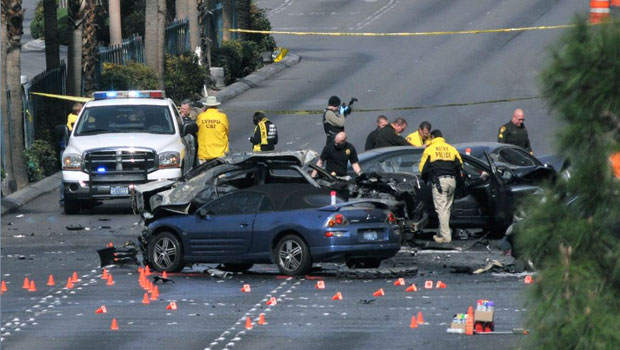 Three people died on the Las Vegas strip early on Thursday when gunmen in a Range Rover sport utility vehicle opened fire on a Maserati, killing the driver and touching off a fiery multi-car crash.

The driver of the Maserati was slain in the pre-dawn shooting, and his car collided with a taxi carrying two people, Las Vegas Metropolitan Police spokesman Officer Jose Hernandez said.

The cab exploded into flames in the intersection of Las Vegas Boulevard and Flamingo Road in front of several casino resorts, killing the driver and a passenger.

“They were trapped inside the taxi and tragically both lost their lives,” Hernandez said.

The gunfire and collision in the busy intersection near the Bellagio and Caesar’s Palace hotels triggered another crash involving four other vehicles that left at least four people injured, Hernandez said.

The dramatic scene that more than one tourist compared to something out of a violent action movie set off a frantic search for the occupants of the Range Rover and marked the latest violent episode on the Strip since the beginning of the year.

“There was a loud bang and I hear two other booms. I looked out my window at Caesars Palace and could see the fireball,” witness John Lamb was quoted as saying on the news website of Las Vegas KLAS-TV’s 8News Now.

Hernandez said investigators had not yet established a motive for the shooting or determined how many occupants of the Range Rover had opened fire on the Maserati.

The Range Rover sped from the scene. Hernandez said police had no leads on the suspects or their vehicle and were asking for help from the public. The intersection was expected to remain closed for much of Thursday due to the investigation.

An injured passenger in the Maserati and three people hurt in the crashes were taken to University Medical Center.

A hospital spokeswoman said three of the people had been treated and released. She declined to provide information about the fourth person.

The incident occurred not far from where rapper Tupac Shakur was shot in September 1996 while riding in a BMW being driven by Death Row Records co-founder Marion “Suge” Knight.

Shakur, 25, was hit by gunfire from at least one assailant in a Cadillac while sitting in Knight’s car at the intersection of Flamingo Road and Koval Lane and died six days later at University Medical Center. The crime remains unsolved.

If you have been arrested for a Violent Crime the Law Offices of Daniel R. Perlman can help. Please contact a Los Angeles Criminal Attorney today to have your case reviewed.